Gyantse was historically considered the third largest and most prominent town in Tibet (after Lhasa, and Shigatse), It once was a major center for trade with India, and in 1904 the city became a battlefield when the British Army under Colonel Frances Younghusband attacked the city.The town was surrounded by a wall 3 kilometres (1.9 mi) long
It is 3,977 meters (13,050 ft) above sea level, and is located 254 km southwest of Lhasa in the fertile plain of the Nyang River valley and on the Friendship Highway, which connects Kathmandu, Nepal to Lhasa, Tibet.It is the granary of Tibet since ancient times.
Gyantse is notable for its restored Gyantse Dzong or fort, and its magnificent tiered Kumbum (literally, ‘100,000 images’) of the Palcho Monastery, the largest chrten in Tibet.
Festival:The most popular festival celebrated in the monastery is held on 15 April. It is known as the Saka Dawa festival to commemorate Sakyamuni, the founder of Buddhism; this day is said to mark his birthday and also the day of his death. On this occasion, five hundred Lamas chant sutras when local people attend. Horse racing and archery festivals are held in the middle of fourth lunar month. Gyantse ,is strategically located in the Nyang Chu valley on the ancient trade routes from the Chumbi Valley, Yatung and Sikkim, which met here. From Gyantse, routes led to Shigatse downstream and also over the Karo La (Pass) to Central Tibet.The fortress ,Gyantse Dzong(constructed in 1390)guarded the southern approaches to the Yarlung Tsangpo Valley and Lhasa.The town was surrounded by a wall 3 km long.
British military garrison

A British military garrison, consisting mainly of Indian soldiers, was stationed at Gyantse in the first half of the 20th century. It was referred to as a “small” outfit by Sir Walter Buchanan in 1919.Under the reign of the 13th Dalai Lama, it served as a military school to help train Tibetan officers. One Hank Baker, a radio operator posted in Tibet in the 2nd World War, is reported to have inspected “the Indian army garrison” “at Gyantse fort” in 1938.In 1940 the town was still garrisoned by the British army.

Tour
Tour Photo
Tourist Map
Video
Gyantse is notable for its restored Gyantse Dzong or fort, and its magnificent tiered Kumbum (literally, ‘100,000 images’) of the Palcho Monastery, the largest chörten in Tibet. The Kumbum was commissioned by a Gyantse prince in 1427 and was an important centre of the Sakya school of Tibetan Buddhism. This religious structure contains 77 chapels in its six floors, and is illustrated with over 10,000 murals, many showing a strong Nepali influence, which have survived almost entirely intact. They are the last of its kind to be found in Tibet. Many of the restored clay statues are of less artistry than the destroyed originals – but they are still spectacular.

Gyantse Dzong or Gyantse Fortress is one of the best preserved dzongs in Tibet, perched high above the town of Gyantse on a huge spur of grey brown rock.
According to Vitali, the fortress was constructed in 1390 and guarded the southern approaches to the Tsangpo Valley and Lhasa.The town was surrounded by a wall 3 kilometres (1.9 mi) long. The entrance is on the eastern side. The Pelkor Monastery is the main monastery in Gyantse,The monastery precinct is a complex of structures, which, apart from the Tsuklakhang Monastery, also includes its Kumbum, believed to be the largest such structure in Tibet.This typical Tibetan Buddhist monastery is the only one large building complex in Tibet that old monastery and stupas are completely preserved and characterized as a monument 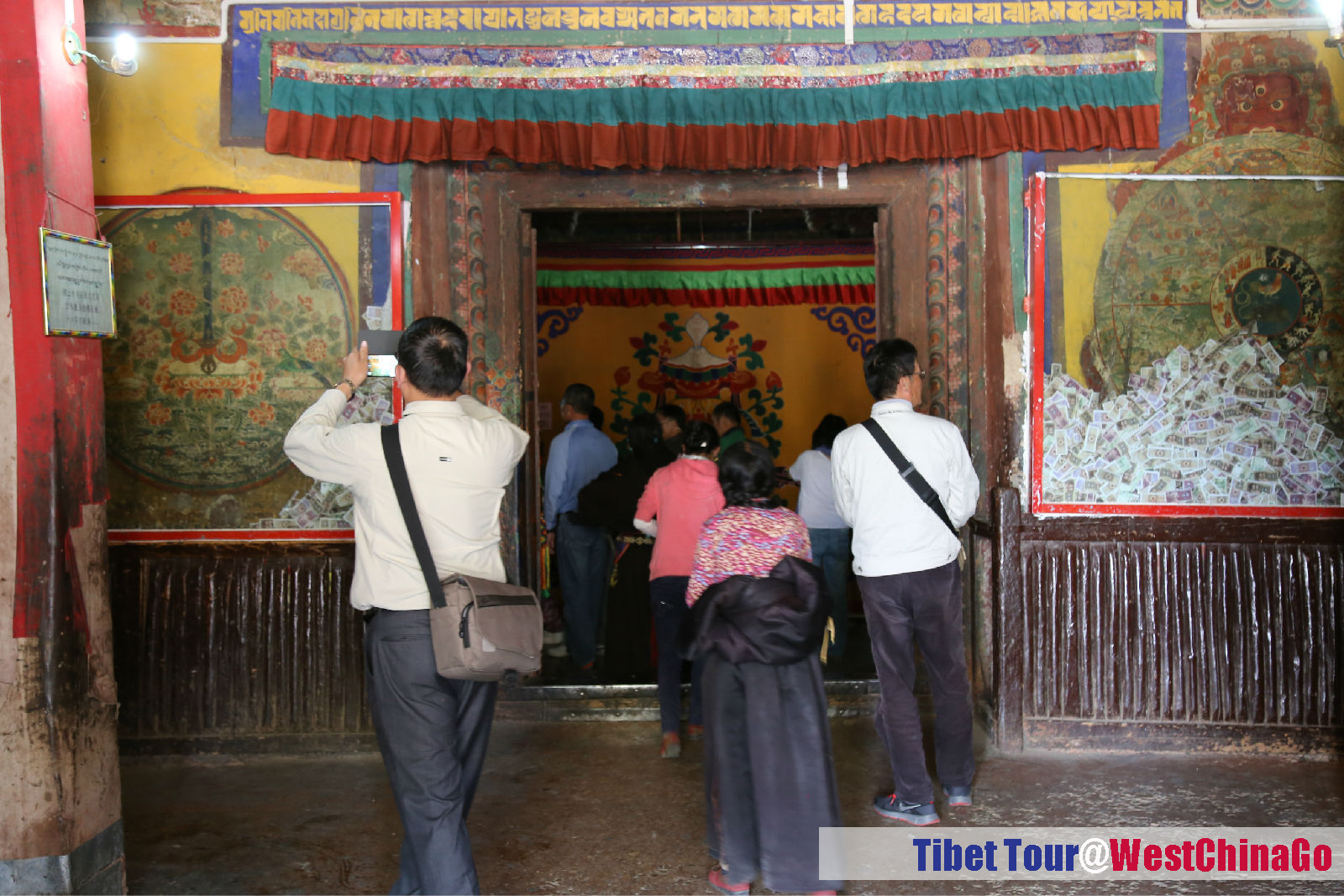