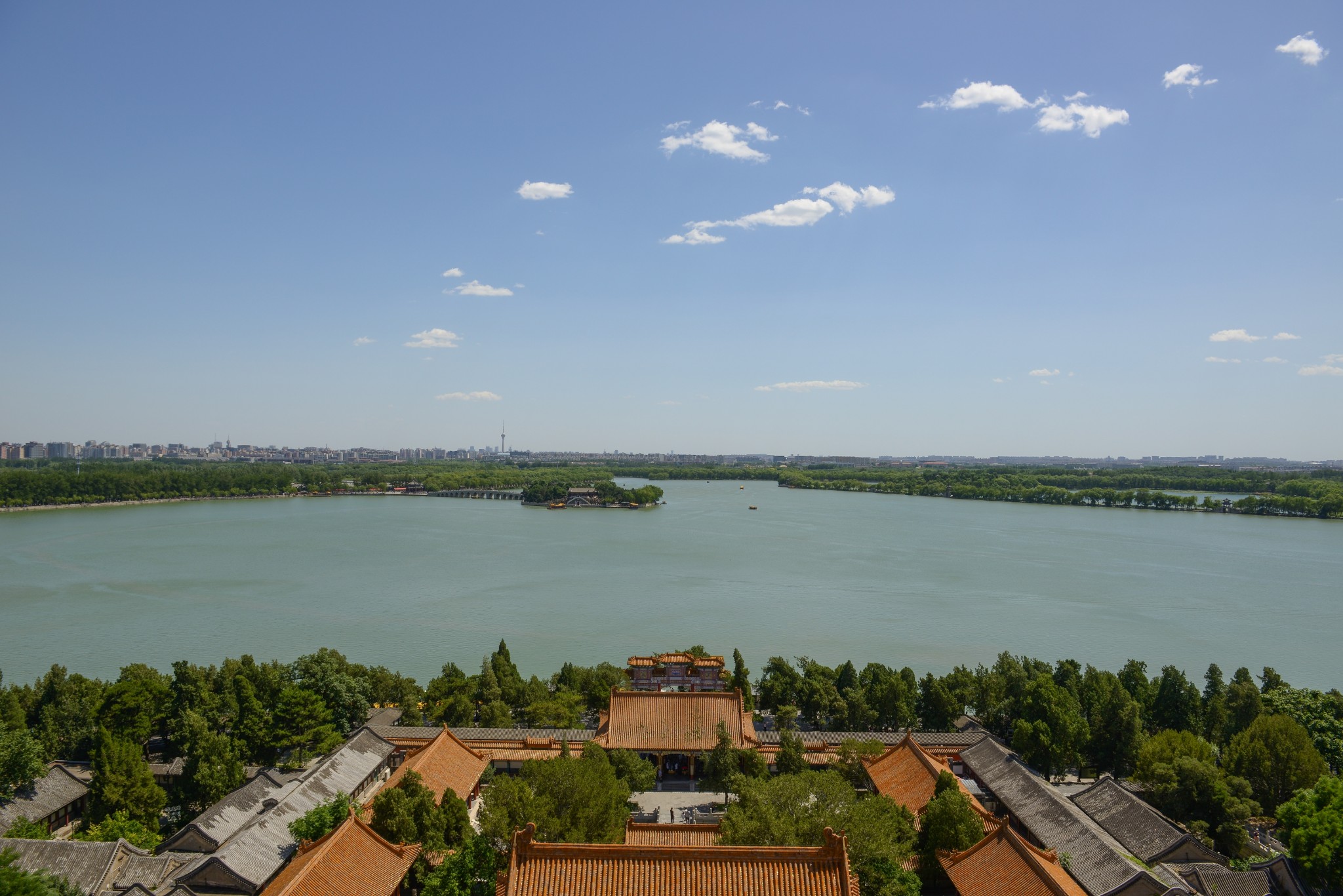 The Summer Palace landscape, dominated mainly by Longevity Hill and Kunming Lake, covers an area of 3.08 square kilometers, three quarters of which is under water. Its 70,000 square meters of building space features a variety of palaces, gardens and other ancient-style architectural structures. Well known for its large and priceless collection of cultural relics, it was among the first group of historical and cultural heritage sites in China to be placed under special state protection.

The Summer Palace, originally named Qingyi Yuan or the Garden of Clear Ripples, was first constructed in 1750. It was razed to the ground by the Anglo-French Allied Forces in 1860. The Government of the Qing Dynasty started to rebuild it in 1886 with funds that it had misappropriated from the Imperial Navy and other sources. Renamed two years later as Yihe Yuan or the Garden of Health and Harmony, it was supposed to serve as a summer resort for the Empress Dowager Cixi. Known also as the Summer Palace, it was ravaged by the Allied Forces of the Eight Powers that invaded China in 1900. The damage was repaired in 1902. Since the founding of the People’s Republic of China, the Summer Palace has undergone several major renovations. Its major attractions such as the Four Great Regions, Suzhou Street, the Pavilion of Bright Scenery, the Hall of Serenity, the Wenchang Galleries and the Plowing and Weaving Scenery Area have been successively restored.

Eastern Dam
Zhichun Pavilion (知春亭; Zhīchūntíng): Located on the east bank of Kunming Lake at the south of the Hall of Jade Billows.
Wenchang Tower (文昌阁; 文昌閣; Wénchānggé): Built to resemble a city gate. It served as an important entry point into the Summer Palace from the east and south during the Qianlong Emperor’s time. The Wenchang Hall (文昌院) beside Wenchang Tower displays cultural artefacts from the Summer Palace.
Kuoru Pavilion (廓如亭; Kuòrútíng): Situated in the middle of the eastern dam, east of the 17 Openings Bridge. It covered an area of 130 square metres.
Bronze Ox (铜牛; 銅牛; Tóngniú): A bronze statue of an ox built in 1755.
Yelü Chucai Shrine (耶律楚材词; 耶律楚材祠; Yēlǜ Chǔcái Cí): A shrine built by the Qianlong Emperor to commemorate Yelü Chucai, an influential statesman in the Mongol Empire. It was closed down after 2003 and its front section was converted into a souvenir shop.

Nanhu Island
17-Arch Bridge (十七孔桥; 十七孔橋; Shíqīkǒngqiáo): Has 17 different types of arches on it. It incorporates features of the Precious Belt Bridge in Suzhou and the Lugou Bridge in Beijing. The entire bridge is 150 metres long and eight metres wide.
Dragon King Temple (龙王庙; 龍王廟; Lóngwángmiào): A temple built to worship the Dragon King.
Hanxu Hall (涵虚堂; 涵虛堂; Hánxūtáng): Located at the north of Nanhu Island, directly facing the Tower of Buddhist Incense on the north bank.
Western Dam
Lake Dividing Bridge (界湖桥; 界湖橋; Jièhúqiáo): The bridge that separates Kunming Lake from the northern lake.
Jade Belt Bridge (玉带桥; 玉帶橋; Yùdàiqiáo)
Binfeng Bridge (豳风桥; 豳風橋; Bīnfēngqiáo)
Jingming Tower (景明楼; 景明樓; Jǐngmínglóu): It was destroyed by the British and French in 1860 and was restored only in 1992. It was designed to imitate

Yueyang Tower.
Mirror Bridge (镜桥; 鏡橋; Jìngqiáo)
White Silk Bridge (练桥; 練橋; Liànqiáo)
Willow Bridge (柳桥; 柳橋; Liǔqiáo): Located most south of the western dam.
Farming and Weaving Picture Scenic Area (耕织图景区; 耕織圖景區; Gēngzhítú Jǐngqū): Built during the Qianlong Emperor’s time, it was designed to bring to life a scene from the daily lives of peasants. This area was excluded from the Summer Palace after it was renovated by Empress Dowager Cixi. In 1949, the area was occupied by the People’s Liberation Army and a paper-making factory was built there. In 2003, the area was incorporated back into the Summer Palace and some old buildings were restored.

How To Get to BeiJing the Summer Palace

By Taxi
pls take us to BeiJing the Summer Palace
Practical Chinese:for taxi driver
请拉我们到北京颐和园(海淀区新建宫门路19号)
By Subway
Transfer to Line 4, get off at 北宫门 beigongmen
Then walk about 500m for arrival
BeiJing metro map 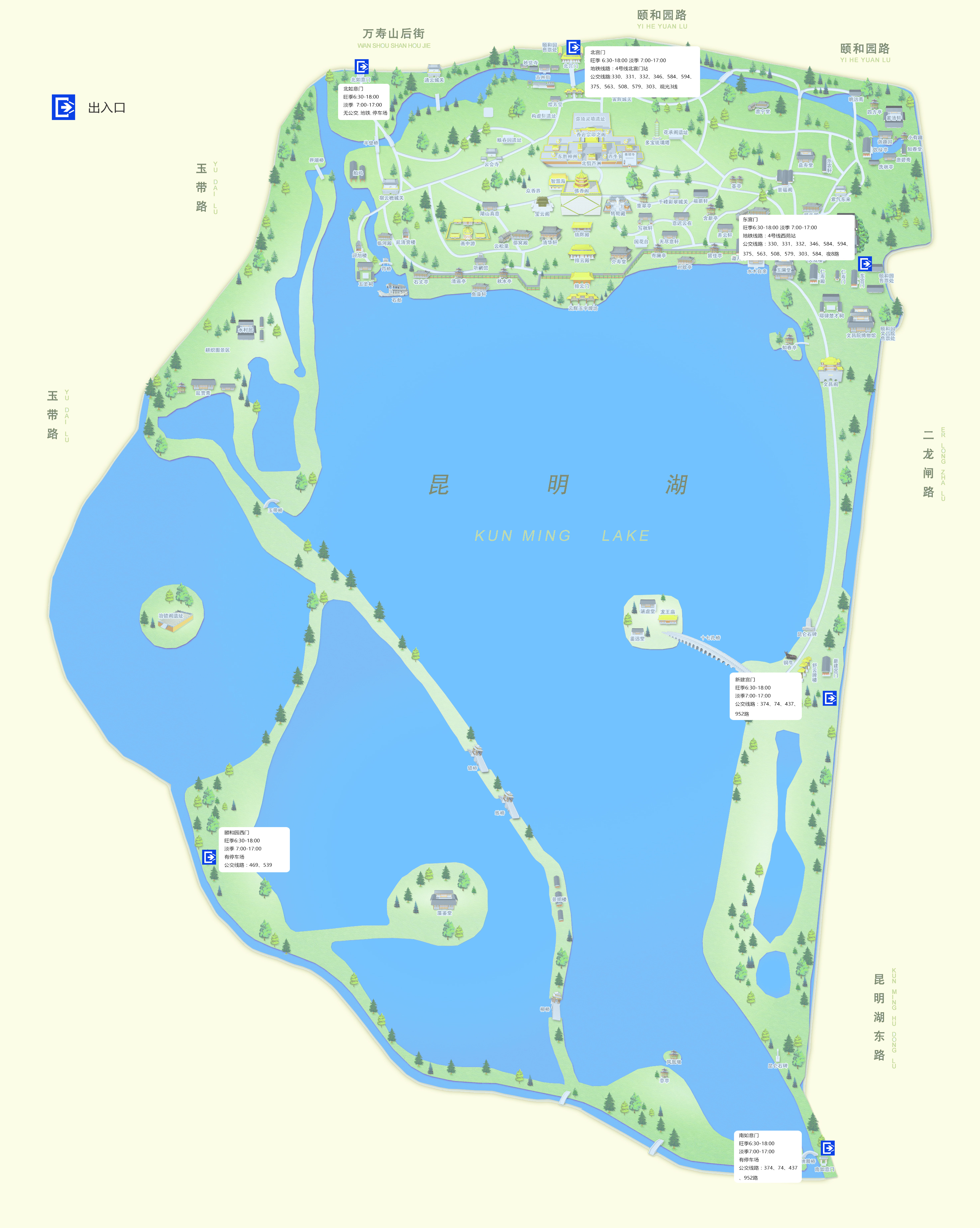