Mount Everest is also called Mt. Qomolangma, which means the ‘Goddess the Third’. Tibetans are forbidden to scale Everest, as the mountain is sacred and integral to their belief systems. Viewing this epic mountain is a once in a lifetime opportunity that can’t be missed when exploring Tibet. The trip from Lhasa to Everest Base Camp is approximately 600kms, and most tour companies will take a number of days to complete the journey. This also gives you time to acclimate to the altitude. The drive up in the minibus, over and through the mountain ranges is cumbersome and slow. The roads weave and twist their way across the face of the range, slowly building and rising in altitude. When you finally stop at a pass through the mountains, you will catch a glimpse of the mountain. Just a small sliver of the great mountain, but enough for your first viewing. From your accommodation, you can either trek or be driven to Everest Base Camp site, it’s about 2-3kms. It sure beats a 10-day trek on the Nepalese side! Mount Everest is located on the border between China and Nepal in the middle section of the Himalayas. The east slope base camp is in Gamagou in Qudang Township, just south of Tingri County, Xigaze Prefecture, Tibet. It is not very difficult to find a free car from Xigaze-Lazi County to New Tingri, but the remaining 100 kilometers to the base camp, the chance of being able to ride a free car is quite low, so it is recommended to charter a car from Lhasa or Xigaze is the safest.

Before leaving Xintingri, go through the mountain formalities at the hotel at the intersection of Xindingri, walk 11 kilometers along the China-Nepal Highway, turn left when you see the sign of Mount Everest Reserve, and bid farewell to the asphalt road.

In Zhaxi Village, Tingri County. From Xigaze-Lazi County to find a ride to New Tingri.

The north of Mount Everest is in China, the south is in Nepal, and Nepal has multiple base camps, which is the most active area for international mountaineering. 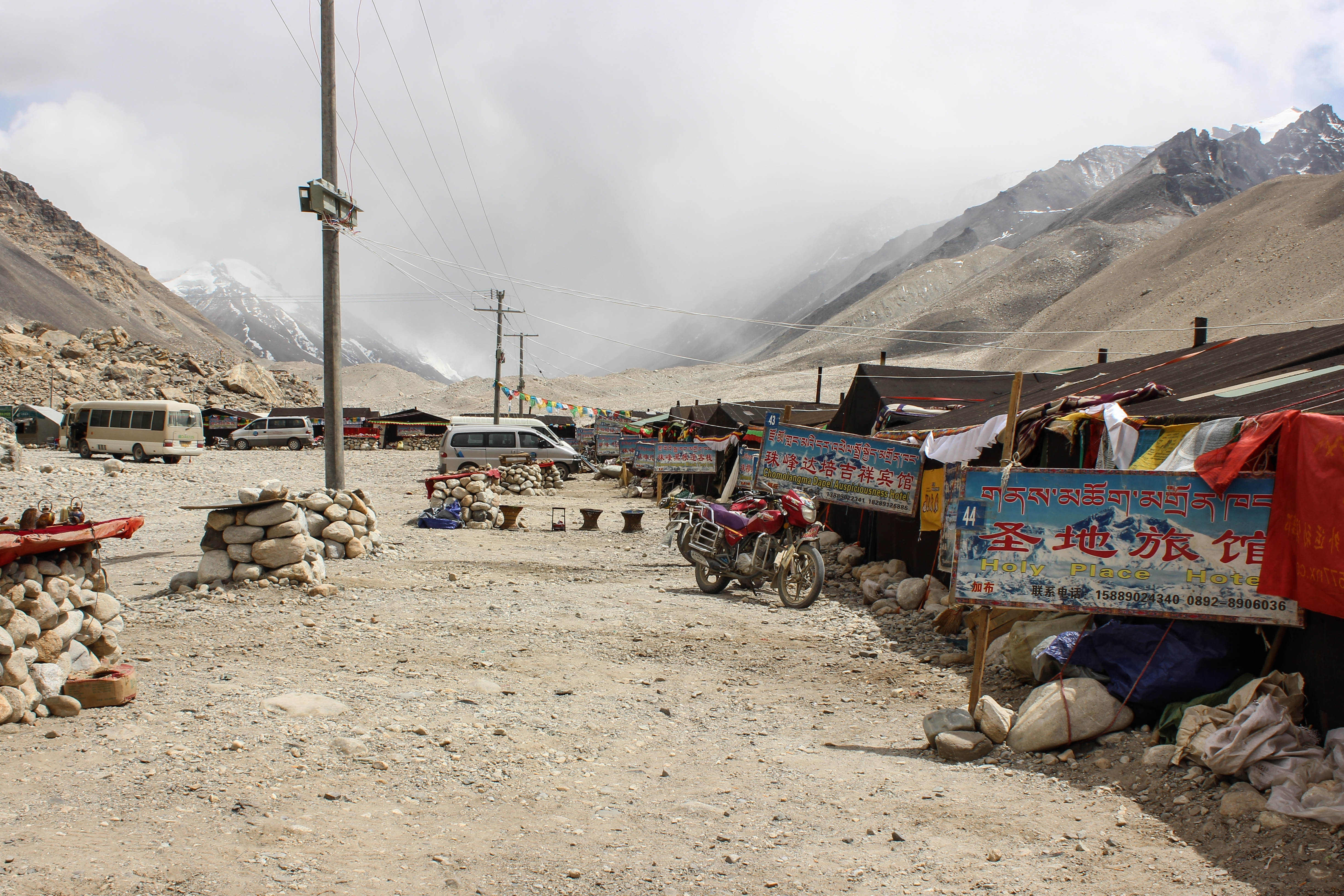 In Gamagou, from south to north, there are Makalu, the world’s fifth highest peak of 8 kilometers, Lhotse, the fourth highest peak, Mount Everest, the first peak, and the beautiful Mount Everest and Gamma Gangri. Many snow-capped mountains of 6 to 7 kilometers.
The Gamagou trek starts from Youpa Bridge in Qudang Township, Dingri County, and passes through Xiaowucuo Camp, Zhuoxiang (Orchid Valley) Camp, Tangxiang Camp, Yega Camp, Baidang Camp, and arrives at Mount Everest East Slope Base Camp After the end, return to Tangxiang View Taipei to the Cuoxuerenma Camp on the same road, cross the Langmara Pass, which is the highest in the whole journey, 5350 meters above sea level, to Lunzhulin Camp, take a bus and return to the circular route of Qudang Township. The walking mileage is 70. More than kilometers, the average altitude is about 5000 meters.

There are tents in Gamagou for climbers and tourists, as well as hotels, cafes, shops and even post offices; there are solar panels in front of the door to provide night lighting. After the climbers rest in the base camp, they can continue their journey to Mount Everest. Mount Everest Base Camp is located in the south of Rongbuk Monastery. It is surrounded by a group of tent hotels with a national flag and a flag of the Mount Everest Reserve in the middle. Mount Everest Base Camp mainly provides accommodation for tourists. It has toilets and a tent post office. It is the highest post office in my country. The monument with an altitude of 5200 meters is located 4 kilometers south of the Mount Everest Base Camp and needs to be reached by eco-car or on foot. Before reaching the monument, armed police guarded them and gave some warnings to the tourists. Apart from two public toilets that represent modern civilization, the base camp has no permanent buildings. From the beginning of April to the end of May each year, it is the best time to reach the summit of Mount Everest. Therefore, during this period, there are mountaineers from all over the world stationed in the base camp. Numerous outdoor tent groups of world-famous brands are scattered on the empty base camp, which is more spectacular Rongbuk Monastery is located on the top of “Dolma” (Tara) on the east and west sides of Rongbukou under Mount Everest, Basong Township, Dingri County, Xigaze Prefecture, Tibet. It is 90 kilometers away from the county resident and 5154 meters above sea level. The terrain is high and cold, and it is the highest altitude in the world. The tallest temple, so the landscape is wonderful.

Rongbuk Monastery, the full name of “Ladduicha Rongbukdong Aqulin Temple”, belongs to the Nyingma School of Tibet, and is a mixed monastery with local characteristics. The Rongbuk Monastery was founded in 1899 by the Red Lama Ngawang Tenzin Lobu. It is located at the end of the Rongbuk Glacier at the northern foot of Mount Everest. It is 5154 meters above sea level and about 20 axioms from the top of Mount Everest. The temple is divided into two parts, the old and the new. The old temple is located 3 kilometers south of the new temple, close to Mount Everest, where the practice cave of the master Guru Rinpoche, as well as the stones and stone pagodas printed with the hand and foot prints of the Guru Rinpoche, remain. The new monastery was built in 1902. The Rongbuk Monastery was once larger. There were more than a dozen subordinate monasteries, some of which were still in Nepal, but were destroyed due to historical reasons. There are now eight subsidiary temples under the main temple, including a nun’s nunnery. As Rongbuk Monastery is about 20 kilometers away from the top of Mount Everest, it has become a base camp for climbing Mount Everest from the northern slope. Looking south from here, it is a great place to watch and photograph Mount Everest. There is a passing road around Rongbuk Monastery. In front of the main hall is a stage with carved beams and painted buildings. Every important festival, local people will come here to watch lamas perform. The Mani stone pile outside the door is usually used by photographers as the prospect of photographing Mount Everest. The temple underwent large-scale construction in 1983. The murals here are worth watching carefully 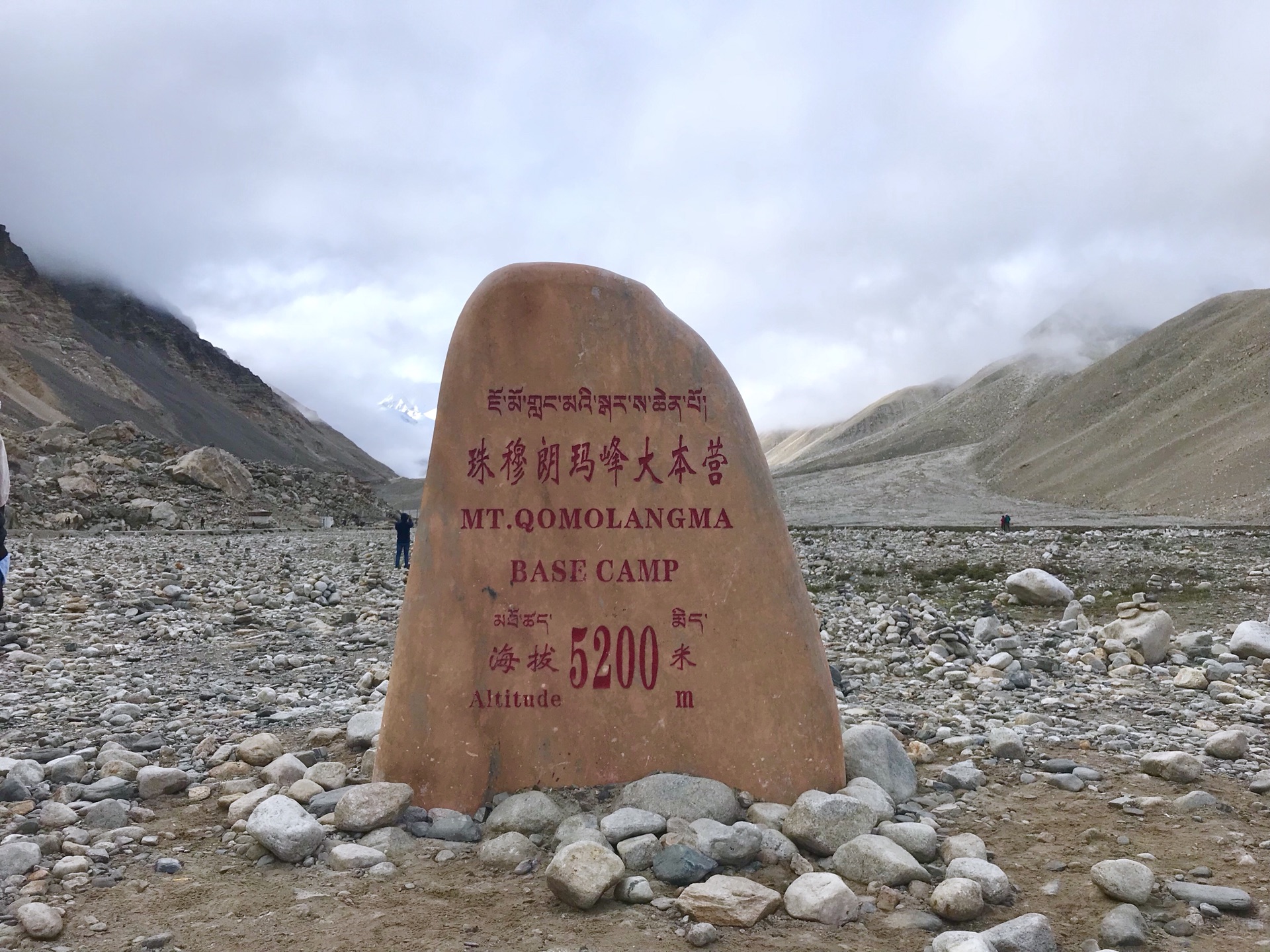 The monument with an altitude of 5200 meters is located 4 kilometers south of the Mount Everest Base Camp and needs to be reached by eco-car or on foot. Before reaching the monument, armed police guarded them and gave some warnings to the tourists.